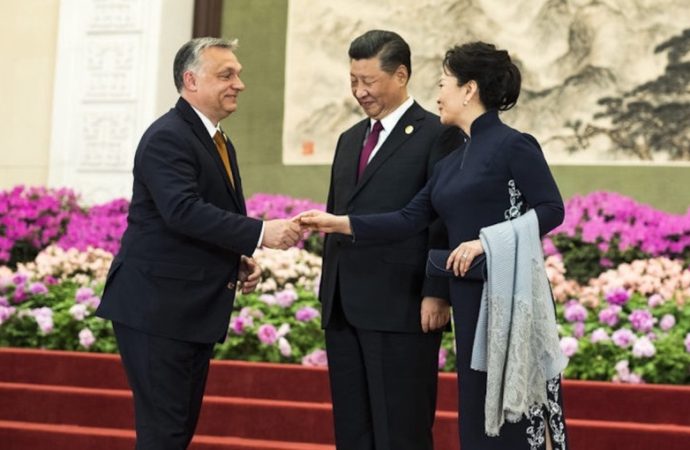 The BRI coincides with Hungary’s national interests and maintaining the order of free trade and the freedom of the world economy is a major task, said Hungary’s illiberal strongman after meeting President Xi Jinping.

The BRI is not a threat, but an opportunity, said Orban, adding that Hungary is willing to promote the overall development of Europe-China relations through the China-CEEC cooperation platform.

The conservative government of Viktor Orban stepped up efforts to improve political ties with China with the launch of the Opening to the East policy in 2010, which aimed to turn Hungary into a regional leader in attracting Chinese capital and investments to Hungary. Bilateral ties intensified after Beijing unveiled its grand development plan in 2013. Hungary has been one of the initiators of the 16+1 Initiative as the country aspires to become a hub in the transportation corridors between China and Europe.

Speaking at the forum on Saturday Orban said western countries must accept that “political and economic systems different from ours can sometimes be more successful and competitive”.

He praised China’s infrastructural development plans, which in his view create cooperation between East and West instead of generating confrontation.

“When East and West worked together, there was economic prosperity and, we lived freely”, Orban said.

Orban’s stance is in stark contrast from that of some other leaders in the region. Turkey opted to not attend the BRI forum, claiming wariness of debt-trap diplomacy and the diplomatic row between Ankara and Beijing over China’s treatment of the Uighurs, a Turkic Muslim minority in Xinjiang province.

Other absentees from the BRI summit are Poland, Spain, Fiji, Sri Lanka, and Argentina, according to the Eurasia Group.

The parties agreed to set up a Hungarian-Chinese university based on the Chinese Academy of Social Sciences and Hungary’s National University of Public Service. The related agreement will be signed during the Chinese House speaker’s visit to Hungary scheduled for late May.

The two ministers agreed to start preparations for the construction of a Budapest-Bucharest rapid railway via Cluj-Napoca. The project, similar to the Budapest-Belgrade reconstruction will be financed by China.

The two countries would cooperate in construction and water management projects.

China Eastern Airlines subsidiary Shanghai Airlines will operate three flights a week to the Hungarian capital from June and talks are underway about linking further cities, Szijjarto said, adding that it is important that the BRI should extend to air transport.

Due to the upcoming construction of a Budapest-Belgrade railway link and the air freight transport capacity recently launched, Chinese logistics firms are now planning to set up a logistics and warehouse hub near the airport in Budapest, he noted.

Budapest Liszt Ferenc International Airport also signed a cooperation agreement with two Chinese airports, Zhengzhou and Xi’an, on cargo flights. It paves the way for Budapest to become the gateway to Hungarian exports to China and the number one hub in Central and Eastern Europe for Chinese goods, it said.

China National Machinery Import and Export Corporation (CMC) could invest up to €1bn in Hungary and set up a regional base in the country under an agreement signed by chairman Ruan Guang and Innovation and Technology Minister Laszlo Palkovics in Beijing.

The innovation and technology ministry noted in a statement that CMC is in the process of building a HUF32bn (€100mn) solar park in Kaposvar which will be the largest in Central Europe. Hungary aims to boost its solar park capacity from around 700MW to 2,000-3,000MW within five years.

Palkovics said Hungary was particularly strong in smart auto development highlighting the self-driving vehicle test track built in western Hungary. The race track one of its kind in Central Europe will also be the testing ground for 5G mobile technology. Huawei is among the companies taking a role in the development of 5G technology in Hungary.