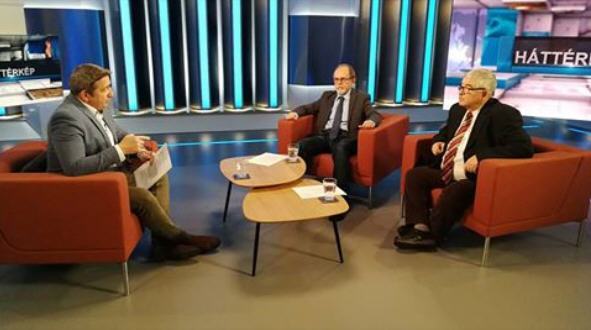 The story of Aleksei Torubarov’s six-year struggle for political asylum in Hungary, summarized yesterday, cannot be separated from the unusually close relations between Russia and Hungary. For a number of years Vladimir Putin and Viktor Orbán have had a close working relationship, based on their autocratic aspirations and most likely on many other considerations that are still not entirely clear. Orbán certainly doesn’t want to annoy his Russian friend by granting asylum to a political refugee from Russia.

Until 2009 Viktor Orbán was known to be a Russophobe of sorts, who entertained the creation of an anti-Russian alliance of East-Central European nations, forming a cordon sanitaire against possible Russian aggression. But then, after 2010, the Orbán administration’s foreign policy took an unexpected and dangerous turn. Hungary became the most loyal friend of Russia in the region. The cause of this sudden change of heart is still a hotly debated subject; many are convinced that it was not exactly voluntary. As was to be expected, this pro-Russian foreign policy of a member of the European Union and, more importantly, of NATO caused concern both in Europe and in the United States. But Orbán refused to loosen Hungary’s economic and political ties with Putin’s Russia. On the contrary, the relationship between the two autocratic countries has become closer over the years.

One recent sign of the ever closer relations between the countries was the announcement that the International Investment Bank (IIB) would move from Moscow to Budapest. This rather small bank is the successor to the Comecon Bank, which served members of the Council for Mutual Economic Assistance in Soviet times. Participating countries are Bulgaria, the Czech Republic, Hungary, Romania, and Slovakia, in addition to Russia, Mongolia, Vietnam, and Cuba.

Why did Russia want to move IIB to Hungary? It is a well-known fact that the Russian secret services often use banks as a camouflage for their intelligence work. Having such a spy hub within the European Union is definitely in Russia’s interest. Apparently, the Russians originally wanted to move the bank to Bratislava, but in the last moment Slovak President Andrej Kiska vetoed the plan. At this point Viktor Orbán enthusiastically offered Budapest for IIB, even if its establishment there will be very costly to Hungary. Just lately another large sum of money was expropriated from other budgetary items to cover the continuing expenses of setting up the bank in Budapest.

Two American political scientists from the American Enterprise Institute, a conservative think tank, rang the alarm bell first, calling Hungary “a highly unreliable ally” and IIB “not a normal, technocratic, multilateral development bank but rather an instrument of Russian power projection.” The United States has been trying ever since to convince its allies to divest their assets in IIB. Apparently, the Czech Republic, under considerable U.S. pressure, is contemplating leaving the bank. But the move to Budapest is underway.

Népszava learned from “multiple sources” that several governments, including the American administration, “have been putting strong diplomatic pressure” on the Hungarian government to limit the far too generous privileges, like diplomatic immunity and freedom from any Hungarian oversight, initially extended to all Russian employees of the bank. Of course, changing the terms means that each item must be renegotiated with the Russians. U.S. Ambassador David Cornstein claims that the Hungarian side “is open” to discussing matters with the Russians. Unfortunately, Ambassador Cornstein is not the best source of information, and I’m inclined to believe those who are convinced that the Hungarians are only dragging their feet and fooling their foreign colleagues.

Regardless of what Péter Szijjártó says to Ambassador Cornstein, the project is moving full steam ahead. Hungary’s representative to the board of directors has already been named. He is Imre Boros, an economist and minister without portfolio in the first Orbán government. The 72-year-old Boros can be seen every week on Zsolt Bayer’s program on the far-right Echo TV/Hír TV alongside László Bogár, another economist.

As is often the case with far-right politicians, Boros, it was discovered in 2002, was a paid agentof the ministry of interior in the 1980s with the rank of captain. He was “Comrade D-8” and worked for Department III/II, that was counterintelligence. Since the CEO of the bank will be Nikolai Kosov, whose father Nikolai, Sr. spent 12 years as the KGB chief in Budapest, Boros will be in familiar company.

The appointment of a former paid counterintelligence officer to the board of directors of a bank suspected of being a hub of counterintelligence was received with amusement mixed with disgust in the non-government press. Miklós Hargitai of Népszava considers Boros’s appointment “by the most Christian government in Europe” telling. Boros, “Fidesz’s communist,” as Hargitai calls him, with his past as an agent of Kádár’s ministry of interior, is not just tolerated but promoted by the same Viktor Orbán who in 2002 found socialist Prime Minister Péter Medgyessy’s service in the same organization “the desecration of the new Hungarian democracy.” Péter Medgyessy, “Comrade D-20,” served in the same department of III/II with the rank of lieutenant. Note that Boros’s rank was higher than Medgyessy’s, and therefore I assume his role was also more important.

Viktor Orbán really doesn’t care about the communist past of individuals, especially if they are in the Fidesz camp. In 2002, the trouble with Medgyessy, as far as Viktor Orbán was concerned, wasn’t that he had been a communist counterintelligence officer but that he was his political opponent. Not long time ago, Orbán admitted that he was fighting not against the Kádár regime but against its leaders. So much for the liberal anti-communist.

Viktor Orbán may not care about the intelligence past of Imre Boros, but I wonder what those foreign critics of this Russian bank’s moving to Budapest will think when they learn that Hungary’s representative to the board of directors was once known as Comrade D-8.