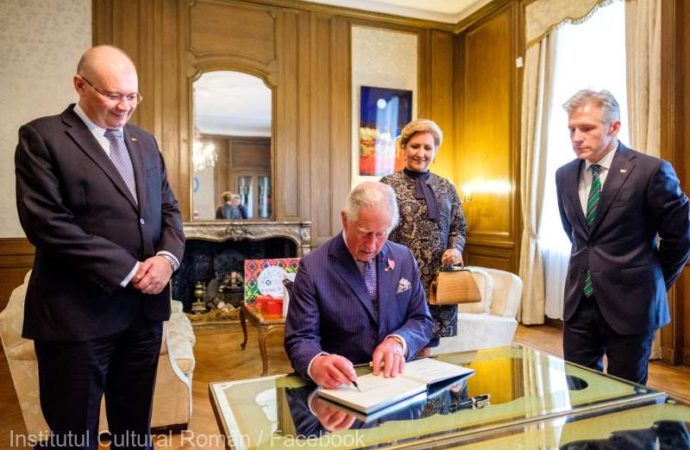 Prince Charles visited the Romanian Cultural Institute (ICR) in London on Thursday, where he admired the exhibition of botanical watercolor paintings that illustrate the hardback collector’s book “Transylvania Florilegium”, which celebrates the uniqueness and diversity of the Romanian natural heritage. The Prince also attended the launch of the namesake luxurious album published by Addison Publications, ICR stated.

Prince Charles was greeted by Dan Mihalache, Romania’s Ambassador to the UK, Liliana Turoiu, president of the Romanian Cultural Institute and Dorian Branea, the director of CRI. They were joined by Sir Nicholas Pearson and Lady Henrietta Pearson, the initiators of the exhibition and the album.

Turoiu discussed with His Highness about the involvement of the institution in the multiple projects focusing on heritage preservation, which are running through the Prince of Wales’s Charitable Foundation in Romania. Meanwhile, the ICR president took the opportunity to thank the heir to the British throne for accepting the inquiry of ICR to join forces with the Prince of Wales’s Foundation in Romania and thus carrying out the program for the celebration of the Greater Union Centennial.

Among the attendees, some of the 36 leading international artists who created the 124 watercolor paintings, personalities of the cultural milieu in London, leaders of the Romanian community in the United Kingdom, diplomats and cultural diplomats, who are working at missions concerning Romania in London and their partners were present.

After visiting the exhibition and leafing through the album, both produced at Prince Charles’ commission, His Highness, an adept of traditional methods of exploiting natural resources, fancied a small culinary exhibition of Romanian organic products and artisanal items by the chefs of the Musiu Restaurant in Timisoara, which was recently entered in the first edition of the Gault & Millau Romania Guide. The Prince also tasted a Selected Cramposie from the renowned Avincis Winery in Dragasani, ICR informs.

At the end of the event, the ICR head gifted the distinguished guest an album and a dedicated artwork by Mihai Topescu, furthermore the Romanian Ambassador offered him a pen inspired by the creator of this writing instrument, Petrache Poenaru.

ICR remarks that this was Prince Charles’s second visit to the Romanian Cultural Institute in London, after having participated in the varnishing of an exhibition of Transylvanian landscape paintings in 2014, which was also created at his suggestion and with his support. The visit was the first time when the Price of Wales visited a Romanian diplomatic mission.

ICR also states that the issue of the album and the exhibition at the ICR London offices were covered by The Guardian and Gardens Illustrated as well, both press from Britain.

The deluxe album “Transylvania Florilegium”, published under the supervision of well-known botanist Dr. John Akeroyd, will be printed in two volumes. Furthermore, it includes a preface written by the Prince of Wales and 124 works of art realized in the past seven years.

The multi-art event organized around this exceptional editorial appearance dedicated to Romania’s biodiversity is part of the Romanian Cultural Institute’s program dedicated to the celebration of the Grand Union Centennial. The varnishing of the exhibition and the launch of the volume were completed by a lecture given by John Akeroyd, Prince Charles’s botanist, concerning the richness of Romanian flora, which is a digital photo exhibition of parks in Bucharest and the inauguration of a botanical art installation called ‘Garden of The Great Union’ in Belgrave Square near Buckingham Palace.

The entire project unravels under the umbrella of the famous “Chelsea Flower Show”, one of London’s most spectacular international events and is executed by RCI together with a consortium of Romanian and British partners: the London Embassy of Romania in, The Prince of Wales’s Foundation, Addison Publications and the Bucharest City Hall through the Creativity, Art and Tradition “Creart” Center in Bucharest.