How massive Hungary intervenes in support of Hungarian farmers from Transylvania, despite “warnings” from the MFA. The Romanian state has no public reaction, and Budapest thanks Liviu Dragnea for support 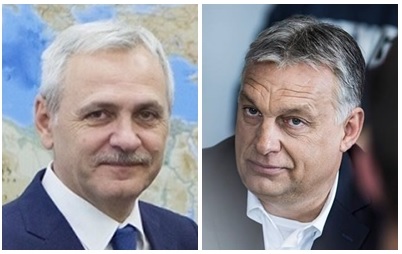 A Hungarian foundation channels millions of euros to farmers in Transylvania through a program inaccessible to potential beneficiaries who do not speak Hungarian. The project addressed to the inhabitants of the Mureş Plain area supports, among others, the purchase of land (by financing the tabulation). Only 8-10% of the beneficiaries are Romanians, the rest of the Hungarians, but among the Romanians funded by Budapest are SDP Mureş head Vasile Gliga.

The Foreign Ministry claims to have warned Budapest, but so far no authority of the Romanian state has publicly communicated on this subject. We recall that the Hungarian government is increasingly involved in Transylvania, allocating huge sums for controlling the Hungarian language, economic, cultural, social, and religious projects of Romanian citizens of Hungarian ethnicity. Further: In 2014, an official of the Hungarian Embassy in Bucharest revealed a plan of the Orban government for the purchase of agricultural land in Transylvania.

The Hungarian Government’s program raises questions about compliance with European and national state aid law, since for Hungarian non-speakers access to information on the official website is almost impossible, with most of the relevant information being provided only in Hungarian.

The Romanian authorities have not reacted publicly to what the official website of the Hungarian foundation running the project calls “sustainable economic development and the creation of the foundations for long-term job creation, is the supreme condition for the Hungarians in Romania to remain in the country and to enjoy existential safety”.

Moreover, Hungary thanked Liviu Dragnea formally for supporting the project. Thus, the Hungarian news agency MTI writes that “Levente Magyar, State Secretary for Relations with the Parliament within the Ministry of Foreign Affairs and Foreign Trade of Hungary, considered it important that the Romanian government received the program positively and continues to show an attitude positive. He particularly thanked Liviu Dragnea, the SDP chairman saying that without his support the project would not have reached the current stage (Source).

The Foreign Ministry in Bucharest (MFA) reports in an official response to G4Media.ro that “no bilateral agreement has been concluded between Romania and Hungary on the Economic Development Program managed through the ProEconomica Foundation, and nor has the consent of the Romanian party been otherwise transmitted to its implementation “.

The Ministry of Foreign Affairs also points out that “it has repeatedly taken steps to the Hungarian side, both through diplomatic correspondence and in bilateral meetings and contacts, regarding the Program”, steps in which Romanian diplomats called for “the project to be carried out only with the involvement of the Romanian authorities, in a transparent and non-discriminatory manner “. However, Hungary continues to run the project without the formal involvement of the Romanian authorities. However, there is no public position of the Romanian state to ask Budapest for compliance with Bucharest’s requests.

Emőke Geréb, Legal Adviser at Pro Economica Foundation, also told G4Media.ro that “As far as the list of beneficiaries is concerned, we are grateful that the grant award procedure has not yet been finalized, as the final report submitted by the beneficials. With the approval of these reports, the final list of beneficiaries will be drawn up, a list that will be made public on our website and accessible in both Hungarian and Romanian. ”

Instead, the Foreign Ministry points out to G4Media.ro that “it has drawn Hungary’s attention that” the granting of economic assistance goes beyond the preferential treatment that may be offered by a state to its related minority in the territory of another state, according to the standards accepted at international level, and that consequently such measures can only be promoted with the consent of the Romanian party, and without any discrimination on the basis of the ethnic criterion. ”

Again, Hungary ignored the warnings of Romania, without the representatives of the Romanian state publicly denouncing this behavior.

Asked by G4Media.ro whether the Hungarian project is in breach of EU state aid law, representatives of the Ministry of Foreign Affairs say that “The available information so far does not allow the MFA to rule on the non-compliance with the EU law of the assistance provided under the Program; we also mention that the Competition Council has the competence to ensure the fulfillment in Romania of the provisions of the TFEU in the field of state aid “.

For its part, the Competition Council states in a response to G4Media.ro that “it does not have any concrete information on the implementation of this program, but we understand that it is about the granting of support measures by the Hungarian state, which can also benefit Romanian economic agents (if you access this link, it can be seen that the overwhelming majority of the regions in which the scheme applies are Hungarian, which supports the hypothesis that this aid comes from the Hungarian government).

What exactly does the project do?

The project funded by Budapest through the Hungarian Foreign Ministry (source) started in February 2018 with a financing session worth 22,434,000 lei. The financing contracts were signed in Târgu Mureş, in the Sapientia University building, when 521 enterprises and individuals received financing worth 1.5 billion forints (approximately 22.434.000 lei) for the acquisition of agricultural machinery or animals for breeding, or for landing agricultural land in the Land Book, according to an article MTI, taken over by the Point publication.

Mónika Kozma, Pro Economist’s manager, told MTI the Hungarian media agency that the 521 winners were selected from over 570 applicants. Asked by MTI, Mónika Kozma also said that the exact number of Romanian ethnic applicants could not be determined, but the proportion was about 8-10% (source).

The Hungarian Government’s project to support the Hungarians in Transylvania will be extended to Hargita and Covasna, according to Monikai Kozma. “According to the plans, the program would also be applied in the counties of Harghita and Covasna. In this sense, there is already a political decision, that is, everyone agrees that the program is good and it should be continued, but it depends very much on its application here in the Mureş Plain, “she told to the site Hatarok Nelkul .

Please note that no bilateral agreement has been concluded between Romania and Hungary on the Economic Development Program managed by the ProEconomica Foundation, nor has the other party’s consent to the implementation of the project been transposed. also, that the Ministry of Foreign Affairs has repeatedly taken steps to the Hungarian side, both through diplomatic correspondence and bilateral meetings and contacts, on the Program.

These steps have called for this project to be carried out only with the involvement of the Romanian authorities, in a transparent and non-discriminatory manner, and in compliance with the Romanian legislation and the rules applicable to the EU internal market, as well as national strategies and programs aimed at regional development.

It has also been pointed out by the Hungarian side that the granting of economic assistance goes beyond the preferential treatment that may be offered by a State to its related minority in the territory of another State in accordance with internationally accepted standards and that consequently such measures may be promoted only with the consent of the Romanian party, and without any discrimination based on the ethnic criterion.

As regards the infringement of Article 107 TFEU, we state that aid granted by a State or through State resources which distorts or threatens to distort competition is incompatible with the internal market. The information available so far does not allow the MFA to rule on the non-compliance with EU law of assistance provided under the Program; we also mention that the Competitiveness Council has the competence to ensure the fulfillment in Romania of the provisions of the TFEU in the field of state aid.

Full response of the Competition Council:

The Competition Council does not have any concrete information on the implementation of this program, but we understand that it is a matter of granting support to the Hungarian State, including Romanian economic agents (if you visit http://www.proeconomicaalapitvany.ro/uploads/ adocs / 1_sz_melleklet_telepulesek_listaja.xls, it can be noticed that the overwhelming majority of the regions to which the scheme applies are Hungarian, which supports the hypothesis that this aid comes from the Hungarian government.

However, using a translation algorithm, the information at http://www.proeconomicaalapitvany.ro/palyazatok/T-01_2017-I shows that both aid for investment in agriculture and aid to SMEs, take the form of de minimis aid granted to natural persons carrying out economic activity or to enterprises in compliance with the European legislation in the field, namely EC Regulation 1408/2013 and EC Regulation no. 1407/2013.

We mention that Article 107 TFEU, as well as European regulations, are the grounds on which state aid is granted in general. In principle, if a support measure is granted in compliance with European regulations in the field, it is supposed to be in line with art. 107 TFEU. As far as “running” is concerned, it should be noted that the administrator / provider of the support measure (probably the government / other Hungarian public authority) is responsible for implementing and observing the transparency rules and the European legislation in force.

From the information available on the site, one can not conclude if the “Pro Economics Foundation provides direct funding”, as you have indicated, and there is also the alternative that the foundation in question has a role as a consultant / intermediary to access funding, as I said, we do not have any information in this regard.