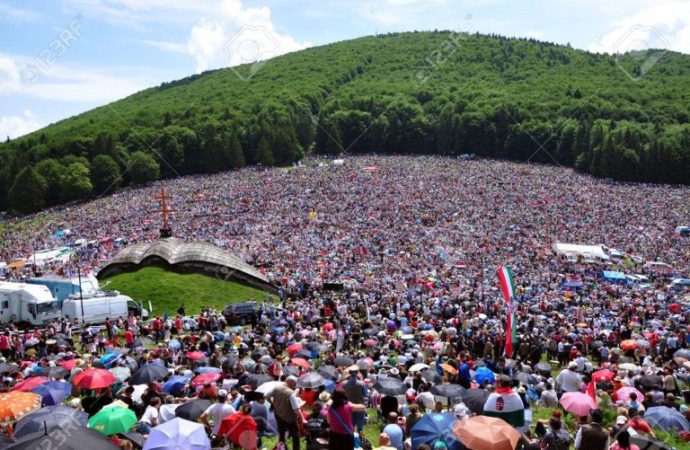 Pope Francis plans to visit Romania and is expected to celebrate an outdoor Mass on June 1, 2019 at the shrine of Our Lady of Csíksomlyó, a pilgrimage site near Şumuleu Ciuc, Romania. This is a historic site of the Seklers (Székelyek), a mostly Catholic Hungarian speaking minority in Romania. Hungarian government officials regularly attend the annual pilgrimage. Only about 5% of Romania’s population is Catholic and less than half of the Hungarian speaking population follows the Catholic faith, the rest is Reformed, Unitarian and Eastern Orthodox in this region.

The planned outdoor mass may attract 500,000 people; the Pope’s speech will be translated to Hungarian. Marc Roscoe Loustau, a Catholic writer whose work appears in the Jesuit magazine America, warns that Hungarian officials might “try to exploit Pope Francis’ trip to Romania at the end of May to embolden hostile attitudes toward migrants and refugees.”

Indeed, pro-Orbán Catholics want to make this event a nationalist showcase. The Jesuit publication is worried that although “many Hungarians go to Csíksomlyó to pray and ask the Virgin Mary for help. But others have political motivations that flagrantly contradict Catholic social teaching.” Orbán stands against everything that Pope Francis was for when he famously invited a group of Syrian refugees onto his plane to Rome. Hungary’s President János Áder already announced that he will travel to Csíksomlyó; Orbán is tight-lipped about his plans.

Loustau points out that not every Hungarian Catholic official is “comfortable hobnobbing with right-wing populists.” A couple of weeks ago Csíksomlyó’s Catholic leadership got into an argument with activists when they pressured the priest to support “a quasi-political ritual” after Mass.

Pro-Orbán Hungarian Jesuits were offended by Loustau’s article. The leader of the Hungarian Jesuits is Elemér Vizí, an ethnic Hungarian born in Romania in Miercurea Ciuc (Csíkszereda in Hungarian) not far from the site of the pilgrimage. Hungary’s Society of Jesus issued an unusual statement accusing Loustau that he is using the Pope’s visit for his own “political agenda.”

Pope Francis will arrive to Bucharest, Romania on May 31 and will meet with state and church leaders. On June 1, Francis will travel to Csíksomlyó and on June 2, he will take part in the beatification of Greek-Catholic martyred bishops in Balázsfalva/Blaj and also meet members of the local Roma community.