DAHR, a wave of incidents at Cemetery in Valea Uzului: Romania has shown its “true face about minorities without makeup” 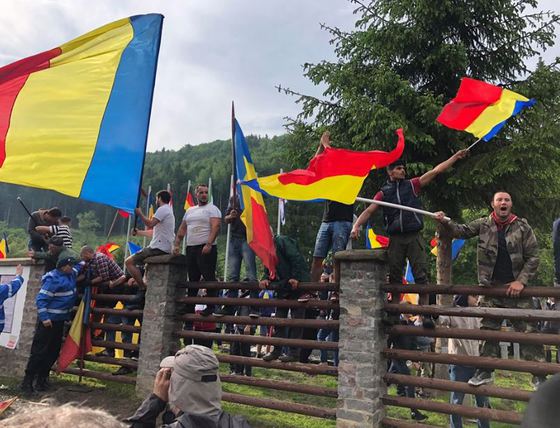 DAHR will refer to international institutions such as the European Parliament, the European Commission, and the embassies of the EU countries and the US Embassy, following the incidents at the Cemetery in the Valea Uzului, which they say have shown “Romania’s real face with regard to minorities.”

DAHR chairman, Kelemen Hunor, told to the MEDIAFAX correspondent on Friday, that he urged the government in April to intervene to resolve the situation at the Cemetery in the Valea Uzului, where illegal works were executed, without approval and in violation of international agreements.

“When we notified the Government in April, because then we found out that working at the Cemetery in the Valea Uzului, and the Government had intervened, we would not have gotten here. There were unlawful works with no approval, international agreements were violated, and the Government must intervene in such situations and restore the legal order. If they did, we would not have gotten here. But they did nothing, either because they could not, or because they did not want, both variants being extremely sad and revolting. The conclusion is that we can not go that far. The Mayor of Dărmăneşti was not held accountable. It is a huge problem and that is why we will refer to all the EU embassies, but also the US Embassy, the European Parliament and we will ask for hearings in the LIBE Committee after the new EP is installed, then we will notify the EC and the Parliamentary Assembly of the Council of Europe, because there is a debate about the situation in Romania. We will appeal to other international bodies dealing with the protection of human rights and the defense of ethnic minority rights, we will ask the Government to hold those responsible, starting with the Mayor of Dărmăneşti and those who vandalized the cemetery and physically assaulted the peaceful people and we will ask for a return to the initial condition before construction”, said Kelemen.

According to him, what happened at the Cemetery in Valea Uzului on Thursday was “barbarism and vandalism”, and Romania showed its “true face about minorities, without makeup”.

“If this is the Romanian model, it means that we are far from Europe and the civilized world. Those who say there is a Romanian model are lying, and those who say that the majority-minority relationship has been resolved, do not tell the truth. What we have seen in the Valea Uzului resembles the 30’s, the last century, in terms of rhetoric, gestures, how they called the Romanian soldiers by name, and those who were there answered “present” shows what the legionaries did in that period. From this point of view, those who have behaved in this way have violated the laws and fall into the criminal legislation. How to destroy a cemetery, how to attack peaceful people, how to remove the crosses from the ground, that is profanity of graves, and that is why I think the authorities should have intervened. On August 10 last year they had the force to intervene when they did not have to, the same commander was now in the Valea Uzului, but they could not intervene. They either did not want to, or could not”, the DAHR leader pointed out.

Kelemen Hunor specified that the heroes who had fallen in different wars took place next to each other, but not on each other and if they wanted to, an extension of the cemetery in the Valea Uzului would have been made on a new plot where they were not buried other soldiers.

“Nor is it good to remember the Romanian soldiers that there are other soldiers buried under those crosses,” he explained.

The DAHR president said he spoke personally with the Interior Minister on Thursday and called for stronger intervention and behavior by gendarmes, noting that the leaders of the Union did everything that could be done politically.

“We used all the means and political paths and we will continue to use them, but at this point everything that was very hard built in the last 25 years was destroyed in a few hours by some irresponsible people and it will not be easy to go any further to restore these bridges. Until it returns to its initial state, there is no choice but to ask, to seek partners to get there, because it is not good for anyone to remain in this situation”, concluded Kelemen Hunor.

More than 1,000 Hungarians had formed a human chain in front of the Uz Epoque Cemetery, Korodi Attila declaring to MEDIAFAX correspondent that people were standing next to each other, and because there were many, he did not have to hold his hand to block access.

Later on, several Romanian citizens in the vicinity of the Valea Uzului Heroes Cemetery to celebrate Heroes Day broke the gendarmes cordon and entered the cemetery, according to Alexandru Danculea, the spokesman for the Bacau County Gendarmerie Inspectorate.

Later on, several Romanian citizens in the vicinity of the Valea Uzului Heroes Cemetery to celebrate Heroes Day broke the gendarmes cordon and entered the cemetery, according to Alexandru Danculea, the spokesman for the Bacau County Gendarmerie Inspectorate.

The Romanian Gendarmerie stated, in connection with the events in the Valea Uzului, that it recommended all participants to have a civilized, calm and appropriate behavior.

“All persons who have committed acts contrary to the law will be identified and, on the basis of the images, legal measures will be ordered. The Romanian Gendarmerie will maintain a public order device in the area to prevent incidents or escalation of conflicts”, the gendarmes said.