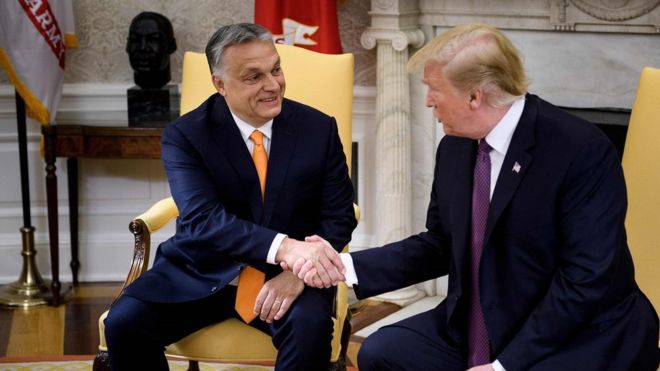 Monday evening at the White House in Washington, Donald Trump met with Viktor Orbán Hungarian Prime Minister. The two statesmen took part in a closed session of about 40 minutes.

The press had written a lot about them before the meeting, and the editorials that were critical of Trump questioned how could the president accept a political leader, who is systematically cutting down on the rule of law, but several articles sympathizing with the Republican party mention Orbán’s approach to China and Russia violate the interests of the US and NATO.

The meeting lasted for 40 minutes, longer than planned. In addition to Donald Trump and Viktor Orbán, Péter Szijjártó, Minister of Foreign Affairs, and John Bolton, US National Security Advisor, were present as well. The meeting was followed by a plenary meeting of the American and Hungarian delegations.

According to Orbán, this was in a good mood, and as he said in his Facebook post, “it was a good day for Hungary.”

At the joint press conference, Trump stated that the United States had a very good relationship with Hungary. Most of the journalist questions were addressed to the American president, including those wondering if Trump was concerned about the decline in Hungarian democracy, but the president said, Orbán is a though, but respectful man who has done right things for the people and immigration.

The meeting of the US President and the Hungarian Prime Minister have also been reported by various US news portals, for example, CNN, saying “Trump welcomed Orbán, Hungary’s far-right prime minister”.

A US government source informed the portal, saying he could ensure that all problematic issues were discussed by the parties, but the purpose of the meeting was simply to strengthen the bond between two NATO Allies.

“The strategic alliance between Hungary and the United States has been strengthened in every respect”, Viktor Orbán said in Budapest.

The head of government, evaluating the meeting, said: “We have assessed the situation well at the beginning of the 2010s.” It is clear that the world is undergoing a major change and “we will soon feel this wind” – he commented on the discussion.

The Prime Minister also spoke a few words about the upcoming European Parliament election, saying that the Hungarians were at the forefront of preserving their culture.

According to his words, today Europe is led by people who are “great advocates of cultural suicide” who “do not mind if our continent is self-sacrificing, culturally speaking”, lacking in their thinking the dimension, which is needed for Europe to protect its cultural identity.

But for the Hungarians, nothing is more important than that”, he said,” to remain the same as we were. ”