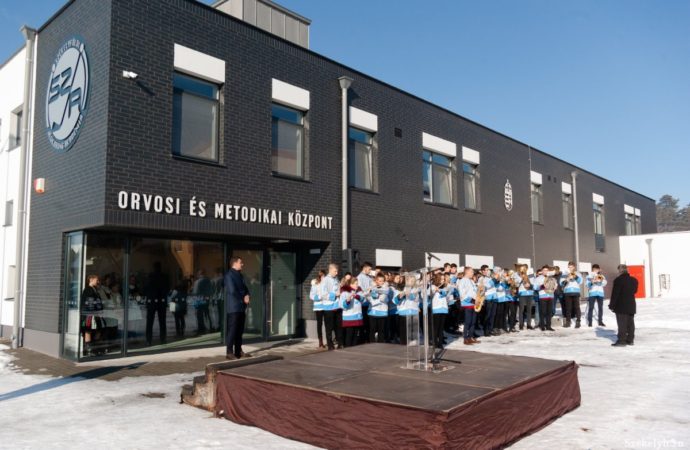 One of the most modern sports facilities in the region, the medical and methodological center of the Szeklerland Ice Hockey Academy, was inaugurated in Csíkkarcfalva on Friday afternoon. The facility located next to the Felcsík Ice rink was built in one year with the support of the Hungarian state for HUF 640 million. The building has a gym for dry training, a skating rink with a synthetic ice surface, skating machines, equipment for improving shooting and hockey stick wielding technique, and one of Romania’s most modern sports and recuperation centers.

Several Hungarian and foreign guests arrived at the ceremony, with hundreds of celebrators attending a beautiful sunny event in front of the building. Ádám Geréd, a member of the U16 team at the Academy, recited an Ady Endre poem, then Tánczos Barna senator, president of Mens Sana Association that runs the Szeklerland Ice Hockey Academy, welcomed the guests and briefly presented the history of this investment. Tánczos said that the Budapest cabinet embraced the wisdom of Gábor Bethlen, the prince of Transylvania, according to which “it is not always possible to do what is necessary, but always to do, what can be done”.

Árpád János Potápi, state secretary of the Prime Minister’s Office responsible for national politics, at the opening ceremony considered that hockey in Szeklerland was more than a game, competition or sport, it has become the self-determination of szeklers, a community building force. According to the Secretary of State, the Hungarian government voted in favor of the szekler future when it supported the establishment of the center in 2016. He added that the government provides additional resources for the building’s equipment.

The facility is also special to serve all three goals, for which we intend to build national politics in the next period: strengthening identity, promoting homeland success, and supporting families – said the Secretary of State.

He added that after culture, sport is the most important identity-forming force. That is why the Hungarian goverment has supported the strengthening of several sports in the Szeklerland. In addition to ice hockey, the Secretary of State mentioned the education of the youth and the revival of the traditions of equestrian sport.

Pál Zsigmond Barna, minister responsible for co-ordinating the activities of the Hungarian delegations in the Carpathian Basin, former consul general of Csíkszereda, recalled that the szekler hockey players played a key role in strengthening the ice hockey sport in Hungary, and now that Hungary has “outshined” Romanian hockey, it is paying back today the aid it received. In the speech of the president of the Hungarian Democratic Association of Romania (RMDSZ), Kelemen Hunor, born in Csíkkarcfalva, recalled that in his childhood he had the dream of defeating the team of Gyergyócsomafalva in ​​hockey. This has failed, but on the basis of his own experience, he said that someone who spent their childhood or teenager years in an community sport environment, they carry on the community consciousness.

He added that such facilities help to strengthen Szeklerland, as they reinvigorate the hope of staying at home, setting up a family, organizing a community. Levente Sipos, Secretary General of the Hungarian Ice Hockey Association, said, among other things, a total of 305 Szeklerland hockey players have been confirmed in the Hungarian hockey championships, either in the junior or adult teams, and 180 of the hockey players are currently assigned to the Hungarian teams are from Szeklerland.

The church blessing preceded the cutting of the ribbon, József Darvas Kozma Roman Catholic priest in Csíkszereda and the Roman Catholic parish priest Árpád Farkas shared their thoughts of celebration, and then the people present recited the Prayer and the Blessed Mary. The good mood was enhanced by the Csíkkarcfalva’s youth brass band, the band composed of hockey player boys and skating girls first played the hockey march song and then the Hungarian and Székely hymns.

In the second half of the ceremony, professionals from the Hockey Academy led the walking tour of Romania’s best-equipped sports center. The Romanian Olympic Committee (COSR), represented by Valentin Tomescu, attended the ceremony, but among the many prestigious guests we discovered Don MacAdam, the Canadian head coach of the Csíkszereda Sports Club, and Zsolt Zakariás, a former speed skater who has lived in Austria for over 30 years, one of the most respected European winter sport fitness trainer.